skip to main | skip to sidebar

Parashat Terumah: From Between the Cherubs

In this week’s parsha, we enter the world of Tabernacle construction (continued for most of the rest of the book of Exodus). The Israelites in the desert are asked to construct a mobile “dwelling place” for God to live on earth, one they can take apart and carry with them wherever they go. This task encapsulates the essence of Torah – to bring God into the world, into everyday life, wherever one goes.

So it is with great interest that we should read these parshiyyot – how does one accomplish such a task? Perhaps the key lies in the first of the Tabernacle items described in the parsha – the aron, the ark. Where does God reside within the Tabernacle? He is said to appear and speak in the space between the two cherubs standing over the ark. These two cherubs are to be facing each other, ish el ahiv , literally, “one toward its brother.” How do we bring God’s presence down to earth? Where does He reside today? In the places where we face each other, working together in a common enterprise, like the two cherubs with their wings outstretched, together creating a canopy over the ark.

This term ish el ahiv, “one man toward his brother,” is repeated numerous times throughout the parsha, most often, later, in the feminine, ishah el ahotah, “one woman toward her sister,” referring to the joining of separate cloths together to make a cover for the Tabernacle. Another frequent term is vehibarta, “you should join or attach” from the same root as the modern Hebrew haver, friend. We also find here the use of an unusual word, te’omim, which here refers to the matching up of planks, and in modern Hebrew means “twins.” The Tabernacle is constructed on the principle of teamwork and friendship, of the joining of separate pieces.

Indeed, the construction of the Tabernacle is the model of a task that cannot be accomplished by one person. It requires weavers, sculptors and carpenters, artists, engineers and managers, all working in concert. The physical details of construction mirror the human process – people are being joined together as well as planks, one facing toward the other.

It is precisely in such spaces of joint effort that God’s presence resides. 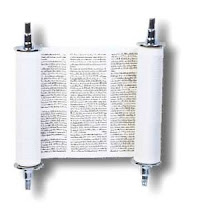 Rachel Anisfeld
Rachel Anisfeld holds a PhD in Rabbinic Literature from the University of Pennsylvania. She is a student and teacher of Torah in a wide variety of contexts. She lived in Albany, NY for many years and now lives in Atlanta, GA with her husband and three children.